The committee which has just embarked on Feniton’s Neighbourhood Plan brought their roadshow to St Andrew’s Fayre today to start the process of extensive public consultation.

There was considerable interest in the plan process and visitors to the stand were asked to mark on a chart which aspects of life in Feniton most concerned them. 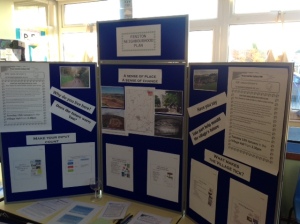 The exercise is not about being anti-development … it is about the village deciding which direction it will take in the coming 15 years over issues such as education, environment, transport and housing. Throughout the afternoon, the Neighbourhood Plan team had a constant stream of people wanting to discuss what they thought the village needed.

One sector of the chart was marked ‘My Space’ and gave the opportunity for people to say what facilities they would like to see the in the village. There were some imaginative suggestions here including an arts centre, a library and a coffee shop.

When I was talking to people on the stand, the major cause of concern was the capacity of the primary school. People who had one child already in the school were concerned about subsequent children getting a place, or risk being taking by taxi to other primary schools which have capacity in the Reception class.

Neighbourhood planning is a right for communities introduced through the Localism Act of 2011. Once adopted, the Feniton’s Neighourhood Plan will be a legal document and will carry considerable weight when major decisions are made about the future of the village. It means that Feniton will shape its future, which is why it is important for everyone to have a say in the process.

The next consultation event will be a drop-in session in the village hall on 13 January 2015, starting at 2.30 pm and going on into the evening.

This entry was posted in News and tagged Feniton, Neighbourhood Plan, Primary School. Bookmark the permalink.