It will come as no surprise to those who have followed the sorry saga of Wainhomes in Feniton that negotiations have broken down between the developer and planners to the extent that yet another Breach of Condition Notice has had to be served by EDDC.

In October 2014, a Breach of Condition Notice was served on Wainhomes for their failure to install attenuation tanks on their site at Winchester Park in Feniton (https://susiebond.wordpress.com/2014/10/14/breach-of-condition-notice-served-on-wainhomes/). 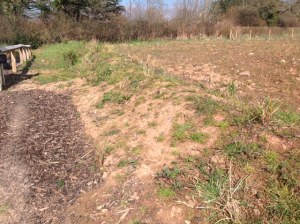 It is all so unnecessary and so time-consuming and has cost the public purse a considerable sum of money. It has also left Feniton Parish Council having to pick up the tab when the nearby play area has to be cleaned up as result of run-off from the site.

The decision to serve the Breach of Condition Notice was not taken lightly by the planners and Legal Department of EDDC. Planning officers worked tirelessly to try and avoid this expensive legal route, despite calls from residents of Feniton who wanted enforcement action to be taken some time ago. After lengthy negotiations which were ultimately fruitless, officers have finally lost patience.

Part of the Breach of Condition Notice calls for the swales to be remodelled to conform to Wainhomes’ own design which was approved as part of their own Flood Risk Assessment. Instead, Wainhomes has installed a series of ditches which is discharging water onto the Parish Council’s play area. This area has been severely flooded twice already this year, leaving the play surface saturated with silty water and forcing the Parish Council to remove the swings for fear of accidents.

Never has a development been so distorted by a developer keen to screw every last ounce of profit out of a site. However, East Devon District Council has now put a marker in the sand clearly stating that they expect every last condition to be adhered to.

This entry was posted in News and tagged Breach of Condition Notice, landscaping, play area, swales, Wainhomes. Bookmark the permalink.