An excellent evening was had by all at Bill Knollman’s post-flood party last night. 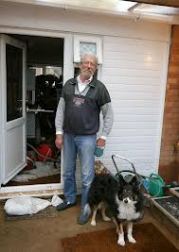 Bill’s bungalow was one of the many homes flooded at the end of 2012 following heavy rain, which caused massive surface runoff, completely overloading Feniton’s surface water drains.

Bill’s excellent initiative was to bring everyone together at the sports and social club in the centre of the village. So the many victims of the flood water and the many who came to their aid met together for an evening of excellent food, the odd drink and dancing for those inclined. All the flood victims are now back in their homes and looking forward to moving on with their lives. However, fear still remains that it is only a matter of time until it all happens again.

In early December 2012, the parish council organised a drop-in session with all the agencies involved to meet the many victims of the flooding. Residents were vociferous in raising their concerns with the authorities.

The immediate result of the session was the establishment of a flood warden scheme which is now up and running with volunteers offering to receive flood alerts from the co-ordinators, offering to help the vulnerable protect their homes with sand bags and others offering to house people who are forced out of their flooded homes.

Funding has also been identified for a flood alleviation scheme which has now reached phase 2, during which plans will be drawn up and levels taken. This phase is expected to take up to 18 months during which time the village will still be vulnerable at times of heavy rain.

And this will continue to be the great fear …

This entry was posted in News. Bookmark the permalink.